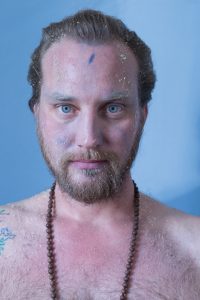 I have many names, numberless forms, endless shapes. Make no mistake, I only achieve simplicity with enormous effort.

As long as I have questions and no answers I’ll keep on writing. I shall argue that we must use generative processes. These are to become conventional metaphors, but at this stage they reflect a world-view which makes no clear distinction between the human body and the world it inhabits; and the transition from one to the other was across frontiers which were fluid and indefinite. This link between man and nature was the key determinant in his consciousness. How do you start at the beginning, if things happen before they happen. Thinking is an act. Feeling is a fact. Put the two together – I am the one writing what I am writing. To you, mind of no mind, in which the timeless way was born. What shape waits in the seed of you, to grow and spread its branches, against a future sky? I was there when numbers, words and thoughts became one, and man figured out how to traverse the distances of space at the speed of thought, finding that all along there was no past, present or future, only one elongated now. Start by remembering the fundamental truth about the parts of any system which is alive. The source of life which you create lies in the power of the language which you have. Is it waiting in the fertile waters,? In the trees beyond the house? In the life you can imagine for yourself? In the open and lovely white page on the waiting desk?