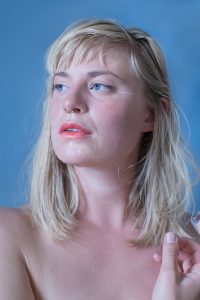 Born without the twin from the egg that she grew out of
Melt seeks continuity.

Realizing that the closest beings always have infinite

and at the same time everything is it’s
re-lations.

She is gazing into eyeballs,
seeking to melt resistances inside and outside of bodies.

to melt into the intensity and
extensity of the bloomspaces between

the I and the other.

Knowing that every time you let go to be continuos with something else it can be
violent, dangerous and even deathly.

Every time something expands what is was in itself must
be fluid.
It is the
fault in between the I and the other

that is the most fascinating.

Sometimes shy and sectretely Melt can let go of her
aching self-awareness
in the spaces of ecstatic excess.

stick your fingers into it and melt with her.