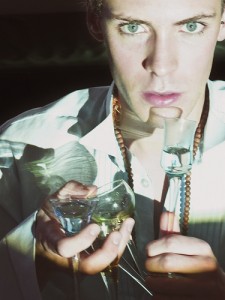 This beauty has his chamber right next to the office of the Sisters. He is like a blank sheet for the sisters as well as the rest of the staff, the students and the visitors to project in and from.

Yndlingen grew up on island near an old vulcano. He did not know his parents and the first period of his life he did not know any other people. Thus he grew up in silence and as projection to himself. When the shades of humans began to penetrate his life he became their mirror. Softly he initiated a process of copying and acting as the people surrounding him. He copied their way of walking, their way of talking, their facial expressions and slowly he began to soak in their feelings and thoughts and projected them onto himself as well as the other way around.

Just his presence tend to make people feel well and comfortable. He enjoys the presence of other who’s happy, and when he finds himself in situations of people sad and sorrowful he feels it as his duty to help and inspire them to become well again. His a sensitive creature, which also turn him into an easy target. Deep down Yndlingen is a “carrier” he assumes unconsciously everyone’s grief, until he is finally filled up. When Yndlingen is filled, he gets depressed and sad.