From the point of Light in the Mind of God

Let Light stream forth into the mind of men;

From the point of Love within the Heart of God

Let Love stream forth into the hearts of men;,

The purpose which the Masters know and serve.

From the centre which we call the race of men,

Let the Plan of Love and Light work out

And may it seal the door where evil dwells.

Let the Light and Love and Power

restore the Plan on Earth. 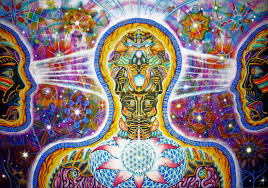